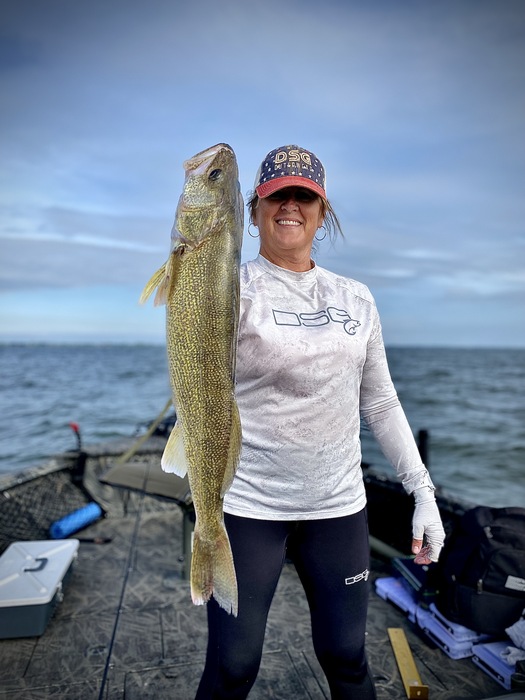 Greg and Amy Diekevers call hunting and fishing far more than just a hobby- it’s a lifestyle and this dynamic fishing duo hit the water together whenever possible.  This year they purchased a Polar Kraft 2010T with a 90 horse Mercury Sea Pro with a big tiller and the upgrade has been a huge one.

“We had a 20-foot, Mod V Crestliner we used for duck hunting and jigging the Detroit River,” they wrote. “Replacing it with the Outlander has been life changing as far as feeling more comfortable and safer in the Polar Kraft. The 2010T is a Deep V and a much deeper and better riding boat that cuts through the water better than the Mod V…..and for jigging you feel way safer in the Outlander.”

It can be hard to find a rig that performs well for both hunting and fishing, but the Diekevers’ have found just that.

“The Outlander is hands down a hunting and fishing machine,” they wrote. “The amount of room this boat has is insane when it comes to hunting and fishing. The floor space when you remove a seat, or all the seats is huge! We could not be happier with the versatility of the boat.”

The versatility of the Outlander has helped them fish and hunt for a variety species this year.

“We start the year off fishing the Detroit River for the month of April, then we head to Linwood, MI, through October where we troll for walleye on Saginaw Bay,” they wrote. “Then we dial in the perch fishing in late August through October…Greg will duck hunt the first part of November on Saginaw Bay and then we will go back to trolling for walleye till ice up.”

While they love several features of the boat, they can’t say enough about the wide-open floor space and storage. They currently have 24 rods in the lockers.

Their adventures are only beginning in their Outlander, but one recent trip was an especially memorable one.

“A very recent trip on Lake Michigan with two of our boys stands out,” they wrote. “We are die hard walleye anglers but years ago we fished salmon on Lake Michigan. We’ve had all the salmon gear for years, but it’d been six years since we used it. A chance presented itself to go out on the Outlander, so we jumped at it.”

So, they dusted off their gear and hit the “Big Lake.”

“We said if we get one fish it’d be worth the 3:30 a.m. alarm,” they said. “We got out, set up and before you know it, it was FISH ON!  It was a thriller hearing the drag scream and seeing the rod shake is way different than walleye. Low and behold there were seven more fish after that. We had a mixed bag of salmon, coho, steelhead and lake trout. A great day!”

They loved their Polar Kraft so much; they are considering adding a Kodiak to their rag-tag fleet in the near future, based on how much they love the brand so far.